This weekend is the Warley Model Railway show - one of the major events in the railway modelling calendar.

Amongst the attendees are Paul Hopkins and John Wakeman with Redford Junction, a TT masterpiece. Once they have been to Warley Paul will have attended 19 exhibitions this year, supporting BRMRC and the 3mm Society, and that has involved 31 days of exhibitions, travelling over 3,800 miles. Additionally, Redford Junction was the first 3mm layout ever to be exhibited at the Great Electric Train show at Gaydon, and he has managed to have an article included in the December 2015 edition of the Railway Modeller, which is the third consecutive year with an article in the Model Railway press. Excellent stuff Paul!

In the meantime, the national group supporting narrow gauge modelling in or about 7mm scale, the 7mm Narrow Gauge Association has, in the latest issue of Narrow Lines, its bi-monthly high quality magazine, an article by our very own Doug Meany on his layout - the Allbroke Estate Railway. Once again BRMRC is mentioned in the article and, of course, the layout has been to a number of exhibitions.

It is pleasing that our members are out flying the Club's flag both in person and in print.

Posted by Webmaster at 14:46 No comments:

Railway Modeller again - with Portsea AND an IMPORTANT members' questionnaire

We have two important announcements - one regarding the Portsea layout and one about a members' questionnaire.

Portsea by Paul Hopkins and John Wakeman in Railway Modeller

For the third year in succession, a layout by BRMRC members has appeared in the Railway Modeller. On this occasion, it is Paul Hopkins' and John Wakeman's beautiful Portsea layout. This is an excellent article, with superb photography and well reflects the good standard of modelling on this layout. We are fortunate to have some very competent modellers within the Club and this is certainly true of Paul and John - well done to you both. So, if you don't get Railway Modeller, rush to your nearest stockist and get one now - the article even includes a plug for our exhibition on 9 & 10 January 2016.

The Club has, for some considerable time, being putting most of its effort into its new buildings.  As you are all aware, we are rapidly approaching completion which means, of course, that we can start considering what we want to do about actual model railway layouts! Now, this is where we need the members' input. So simply use your member's log in, go to the member's home page from the menu on the left and then follow the link to the questionnaire we are asking you to complete. It's not complicated - you simply have a space to tell us what you think.
Posted by Webmaster at 05:09 No comments:

Saturday , October 25th was the date of the Chichester Lions model railway show. Always an entertaining little show with a strong leaning towards entertaining the children there were, nevertheless some very nice exhibits.

Naturally, BRMRC was well represented. Following the children's entertainment theme Aldingbourne Central was there as usual and, also as usual, proved very popular with younger visitors. We also had two Club member's layouts there. Outstanding, of course, was Paul Hopkins' and John Wakeman's Portsea appearing in the December 2015 Railway Modeller, together with my own Slindon Vale railway which I would like to believe is also something a bit special.

Quite apart from these and a one or two other lovely "proper" model railways, backing on to myself and Paul was a running display of model trams in, I believe, the traditional sale of 3/4" to the foot. Old trams tend to be a wonderful example of Victorian engineering and art and I always find it wonderful to see these beauties recreated in such amazing detail.

An enjoyable show with, I believe, a good footfall in a good cause and plenty of our members there either assisting with our exhibits (for which I thank them) or simply as visitors.

Posted by Webmaster at 03:59 No comments:

The Junior section of the club have entered a challenge to build a diorama of a theme of their choice, several were in progress at yesterday’s club meeting and there are some interesting features in them all. They have to be completed in December, and will be considered as part of the Junior achiever award at the Club’s AGM and award ceremony in May 2016. We hope to have an area of the club’s annual exhibition in January will be set aside to display these models.

And talking of which, make sure you have the date for our Annual Exhibition (9-10 January 2016) in your diary. Continuing our theme of constant improvement you really mustn't miss it! We are close to finalising our list of traders, layouts and others and will soon post a list on the website.

Paul’s layout Redford Junction featured in the Hornby magazine no 77 (November 2013), was exhibited at the Great Electric Train Show at Gaydon over the weekend of October 10th & 11th.  Redford is modelled to a scale of 3mm : ft, and this is the first time a layout of this scale has been exhibited at this exhibition.  Redford Junction is also booked to appear at the Warley NEC exhibition in November.
Posted by Webmaster at 13:23 No comments:

A busy weekend for BRMRC

Saturday May 16 was a very busy day for the club with two layouts attending the Model Railway show at Angmering. This was arranged by the West Sussex N gauge Society supporting Jamie's Wish Trust. In attendance was our ever popular “00” scale “Aldingbourne Central” layout which allows children to have go running trains. This show was attended by two club officers, the Chairman and Treasurer and several other members who went along to help with operating and transport of layouts. The Show appears to have been successful and our contribution an important part of it.

Meanwhile, at the Felpham Leisure Center, another show took place arranged by the 7mm Narrow Gauge Association local group known as SWING (Small and Wonderful Industrial & Narrow Gauge) supporting Dizzy (a diabetes charity). Several of the group are also members of BRMRC. These include Club officers, the Vice-Chairman (also 7 mm. member) and Secretary and two Committee members  together with a few other Club members with interest in a different aspect of the hobby to support and help with transport and set up etc.  Whilst not the first of its kind it was the first time at this venue and judging by the queue to get in and the great strain placed on the few running the “Buffet”, was a great success.

Were this not to be enough, in the afternoon, at the home of BRMRC at the Aldingbourne Sports Club two BRMRC members (members of the American section), one of whom built almost single handed (and has recently completed - if a model railway layout is ever completed!), the “G” scale layout between the Goods Shed and the restored Barnham Signal Box, hosted a meet of the “G” scale Society where their members could bring and operate their own trains on this newly constructed layout.
This again proved a very successful few hours with requests for further visits.

All this goes to prove that with friendship, reciprocity and harmony a great deal can be achieved within railway modeling and that BRMRC really is a “Club for all gauges & scales” - and like the NMRA, "sharing Know-how".

News Item submitted by Cliff South
Posted by Webmaster at 05:15 No comments:

On Saturday 9th May 2015, BRMRC were the guests of the Victory Model Railway Club and exhibited one of our lesser seen layouts, 'Barnham Junction' at their 3rd Annual Show held at the Admiral Lord Nelson School.

The day got off to a slow start as Barnham showed it's age, literally - not just because it was set to run stock from circa 1948 to the late 1950's - but due to the usual exhibitor nightmare of 'on the day' wiring issues. Attended to by our Exhibition Manager (John Wakeman) and his able assistant (John McPeake), both who probably can recall early wiring of the period (ha ha), the layout began to perform to much visitor satisfaction and admiration, particularly the rolling stock, which again we were thankful to Paul Hopkins for the loan of.

There was a strong membership attendance from BRMRC, including our junior section and the Chairman, on a 'flying' spot check, was delighted to see all in correct club attire.

Having thoroughly enjoyed the show and the hospitality afforded to us by Victory MRC, to whom we extend our sincere thanks, the day ended on a high note as Barnham Junction was awarded the 'Best in Show' award, as voted for by the paying public. Lots of pictures of a fantastic engraved award presented to the BRMRC team will no doubt follow on the website in due course.

Congratulations & well done to all.

Please ensure you are in attendance before 7:45pm as this will allow for a prompt start.

The evening will be a mix of formality, a review of the last 12 months as well as awards for effort and commitment etc.

One of the UK's biggest model railway shows is held each year just before Easter at Alexandra Palace in north London. It can be guaranteed every year that BRMRC members attend and this year, like last year this included a number of our Junior Members who went up as a party with our Children's Club Officer. They certainly enjoyed both the trip and the show.

They can be seen here gathered around the status of Sir John Betjeman at St. Pancras. He, of course was not only famous as a poet but was largely responsible for saving the Station and the Chambers from demolition in the 1960's. 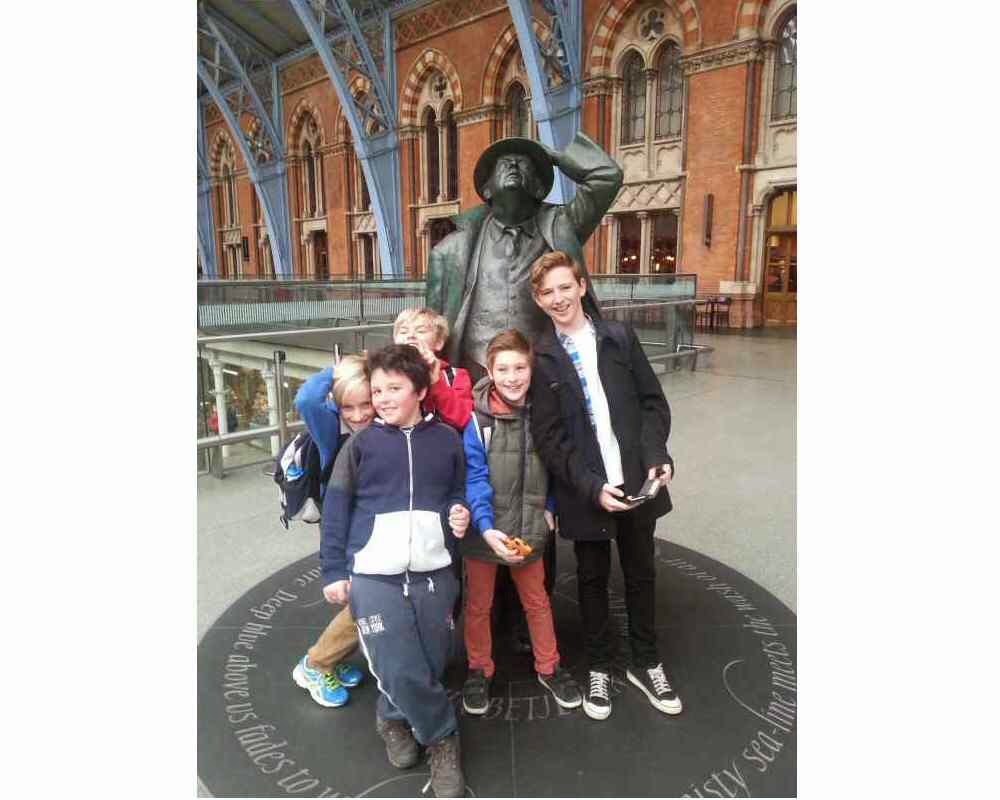 At the show itself, amongst the many high quality layouts was Paul Hopkin's Modbury Torr, a 3mm scale (TT Gauge) masterpiece. Paul, of course, is one of our members and you can see more about some ofhis layouts in our "Member's Layouts" section. It was certainly well appreciated by the youngsters who can be seen here gathered in front of it. Much to engaged to bother posing for the camera this time! 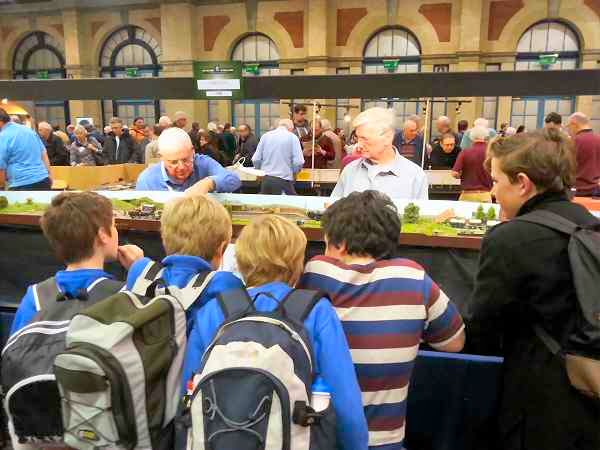 Posted by Webmaster at 10:06 No comments: