Well, it's not time for our normal monthly newsletter yet, but here's an interim snippet.

The above exhibition at the NEC is the largest in the UK, and this year, to celebrate its 20th anniversary it was larger than ever. One of the highlights for many people was an area of the Hall devoted to the Lynton & Barnstaple Railway - long gone but never forgotten. There were several layouts in a variety of scales together with the new build replica L & B 2-6-2 locomotive "Lyd". Although the club was not exhibiting this year, we certainly didn't forget our obligations to the modelling community, with some of the members of our Narrow Gauge Group helping with the operation of a brace of L & B 009 layouts belonging to Tony Peart, a local modeller of longstanding and L & B supporter. 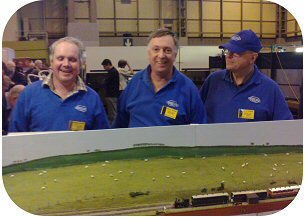 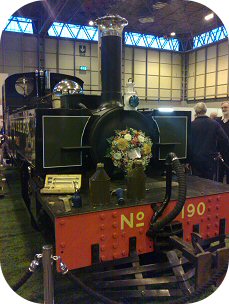 Well, it hardly seems commenting on how busy the month has been - recently they have all been! Future comments may well be restricted to when we have a quiet month!

So, what has been going on? On the exhibition front the main event was, of course, the Chichester Lions Annual Exhibition to which we took several layouts. One of those was Little Bognor, which could well have been handicapped by almost the entire narrow gauge group of the club being at ExpoNG in Swanley. As ever, though, thanks to the usual club stalwarts it was able to put on its usual display. Aldingbourne Central was there as usual and the donation box produced another £17 towards club funds. Unfortunately, there was a minor accident with one of the boards - but at least this should cost less to repair than the amount of donations! Perhaps this is a good time to mention that accidents WILL happen and we are, perhaps, more blessed than other clubs so far as how few and far between they are.

Apart from the big vote of thanks to all those who attended the show and helped operate the layouts  a special mention should perhaps be made of Steve Shrubb who took his layout, Rooksbury Hollow TMD - as far as I know, its exhibition debut. It, like the other layouts, flew the club's flag well and demonstrated yet again that we have a huge pool of ability in our membership.

At the same weekend, Paul Hopkins took one of his 3mm layouts to Belgium where it was well received. Nevertheless, his main memory seems to be how much cheaper one can buy European products over there - Preiser figures being cited as prime example. "Rip-off Britain" indeed!

Work has continued unremittingly on the Page Mountain layout. Tracklaying is now complete and wiring well under way. A great deal of work is being done by the dedicated band under John Wakeman's project leadership on at least two nights a week and it is rapidly taking shape with a view to displaying it at Bognor Regis MRC Ltd's exhibition in January.

Club members continue to spend Saturday mornings working on the Signal Box. Progress is slow but sure, the current main job being painting the windows - or at least the window frames. With permissions to erect the balcony and external stairs in place we are approaching the final stages of restoring its external appearance to its former glory.

Work has continued on arguably our largest current project, the "Barn". In some respects we are currently limited in that we cannot take official possession until ACSC have drawn up the lease - they are happy that we carry out minor essential repairs and, of course, they are actually funding the refurbishment of the Referee's changing room which is well under way. As a by-product of that, the first secure storage area is now complete and we are able to carry out a limited amount of storage. Having said that, it sounds as though little work has been done, but even these few aspects have required considerable effort and have resulted in an internal transformation. I hope to update the Barn section of the website to reflect this soon.

During the month we have had at least one new member and in the last couple of weeks we have been joined by a couple of prospective members. Welcome to you all.

In these exceptionally busy periods, I must close with a vote of thanks to the many members who have given selflessly of their time, enthusiasm and abilities to these various projects. Your committee is deeply appreciative of this but would urge still more of you to do what you can. However small, every contribution is welcomed.

Last, but not least, forthcoming exhibitions and the like. Aldingbourne Central will be at Manor Nurseries on 1st and 8th December and help will be needed for those two days. I have already mentioned the Exhibition in January. Don't forget that the active participation of you all is essential to the success of that exhibition. Mark it in your diary, help will be needed on the preceding Friday evening and on both the Saturday and Sunday. Please do your utmost to come and help throughout as much of that period is possible.